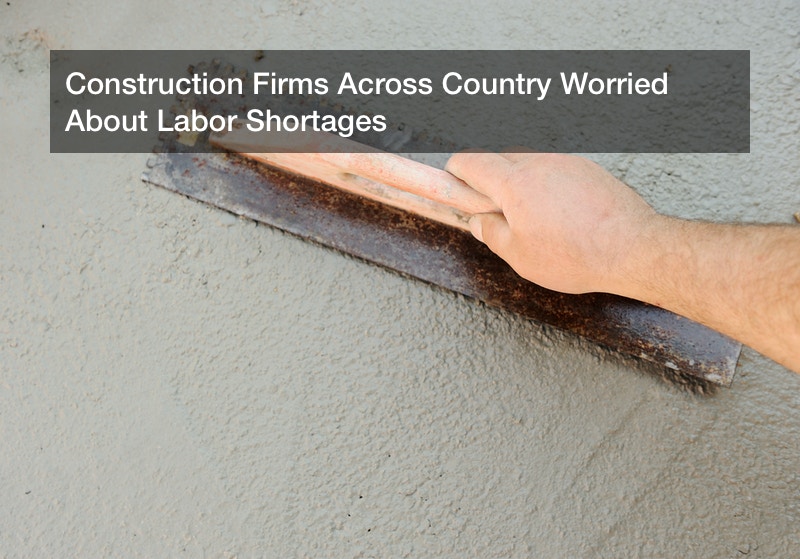 For both commercial and residential structures, construction workers spend hours building, remodeling, and securing structures all over the world. It’s truly an essential part of everyday life and business.

With a market share of around 10%, the U.S. is the second largest construction market across the globe and it’s only expected to grow. In fact, according to data from the U.S. Chamber of Commerce, two in three construction professionals believe that the market will continue to thrive throughout the next year.

Despite these market projections, however, construction organizations across the country have had to deal with labor shortages.

According to CNBC, construction shortages have caused various companies to get creative when it comes to combatting these labor issues.

“Having employees really feel like they are permanent here and that there are opportunities attracts them,” said Larry Lopez, president of construction staffing service Green JobWorks in Baltimore. “I think having some kind of ownership and belonging to the company, because we are doing our own projects, is a benefit I don’t think any other staffing company is doing.”

In order to combat the competitive market, JobWorks offers benefits like paid time off, annual raises, and health care to its construction workers.

Additionally, it seems as though the strong U.S. economy is impacting the construction sector in two ways: boosting the need for construction from consumers and businesses and exacerbating the market’s growing inability to fill construction jobs.

Since the overall U.S. economy is quite strong, both commercial property owners and residential homeowners have more cash on hand to perform various construction projects. Creating office buildings requires different construction codes than it if a home were to be built, but there might not be enough employed workers to get all these construction tasks completed — or even started.

“We are projected to have about $1.3 trillion in construction spend this year,” added Mike Bellaman, president and CEO of the trade group Associated Builders and Contractors. “We still project that we have another 400,000 to 500,000 jobs ready to be filled. And if we continue to grow at modest rates and if we get an infrastructure package — says $100 billion a year over 10 years — we could add another 700,000 jobs.”

According to FOX Business, despite the national worker shortage, construction firms are optimistic about job and project prospects in the coming year. Wholly 79% of construction firms plan to expand headcount in 2019, according to a newly released survey from the Associated General Contractors of America and Safe Construction and Real Estate.

This will be the third consecutive year of planned increases… however, 78% of construction firms additionally report that they are having a difficult time filling both craft and salaried construction jobs.

Early projects show that the majority of construction firms will expand employment by 10% or less, but 7% of firms will increase their headcount by more than 25%.

Another strategy construction organizations are implementing in order to bring in more workers is to raise pay. Approximately 60% of respondents stated that they had already increased base-pay rates, while 29% provided additional bonuses and incentives.

“As growing demand and labor shortages force contractors to do more with less, many firms are increasing their investments in labor-saving technologies like building information modeling, lean construction and robotics,” added Ken Simonson, chief economist of the Associated General Contractors of America and Sage Construction and Real Estate.